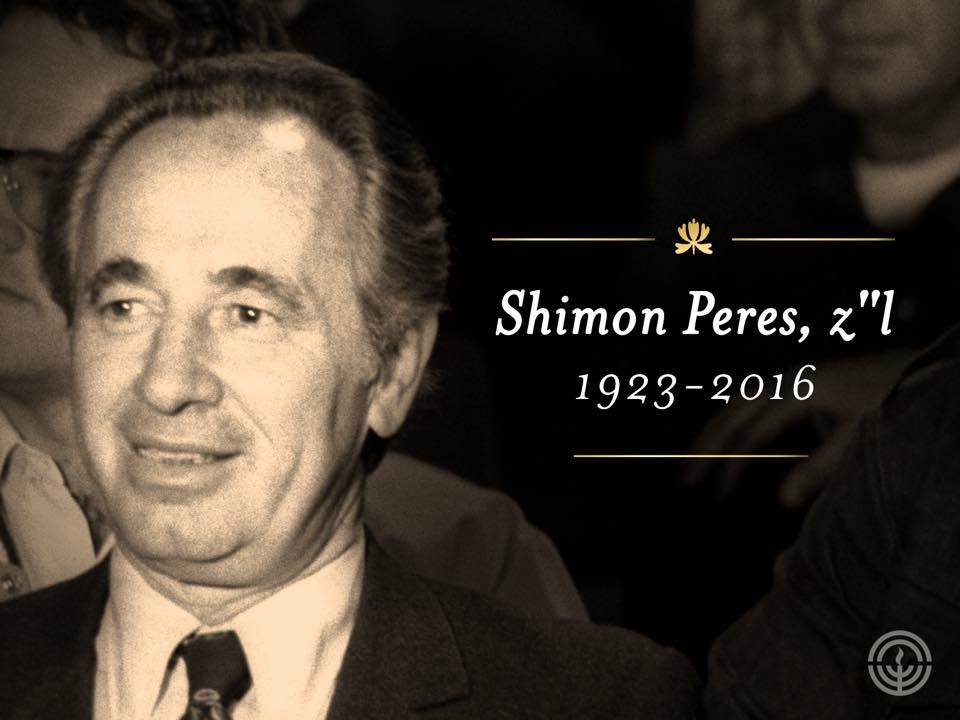 The Jewish Community Federation of Richmond and its Jewish Community Relations Committee are deeply saddened by the passing of Shimon Peres z”l and mourns the loss of Israel's elder statesman, nation-builder, and peacemaker who devoted his life to the service of his country and the Jewish people. Peres is universally recognized as one of Israel’s founding fathers.

For Israel’s seven decades, Peres served his nation. As prime minister (twice); as minister of defense, foreign affairs, finance and transportation; and, until 2014, as president, he never left the public stage. He secured Israel's deterrent capability and its defensive strength, worked to establish true peace within Israel as well as between Israel and her neighbors, and stood at the forefront of the country’s transformation into a technological superpower – the Startup Nation. An architect of the Oslo peace accords, his pursuit of a peace deal with Palestinians, intercultural reconciliation and economic integration earned him a well-deserved Nobel Peace Prize in 1994.

Peres was a frequent, honored guest at many of JFNA's General Assemblies, and met regularly with dozens—if not hundreds—of Federation missions across the decades, often warmly welcoming them to his home.

Jerry Silverman, Jewish Federations of North America president and CEO commented, “It has been said that Shimon Peres will be remembered along with the great leaders of Israel who fought in the War of Independence: David Ben-Gurion, Menachem Begin and Yitzhak Rabin.”

"President Peres was a true visionary and statesman…" said Jewish Council for Public Affairs Board Chair Cheryl Fishbein.”It's hard to imagine Israel without him." JCPA's President and CEO, David Bernstein, who met with Peres earlier this year remarked, "One might expect a man in his 90s to speak fondly of the past, but even in his final year President Peres spoke compellingly about the future. I don't think there has been anyone quite like him or anyone who will be like him again."

As the last living member of Israel’s founding generation, Mr. Peres bequeaths a remarkable legacy to the Jewish people and serves as a model for current and future leaders both in Israel and around the globe.

We bow our heads in deep sadness at the loss of our father, teacher, leader, and friend.

May his memory be a blessing.